Robert Mapplethorpe (1946-1989) is best known for his photographic work, particularly his controversial images of the BDSM scene in New York from the late 1960s and early 70s. But he only started working exclusively with photography after 1975, after he was given a Hasselband 500 camera by curator and collector Sam Wagstaff, also his mentor and lover. From 1963 to 1969, while studying painting and sculpture at the Pratt Institute in Brooklyn, Mapplethorpe produced numerous drawings, collages and three-dimensional assemblages using all kinds of media and recycled objects. In 1971, he started taking Polaroids and progressively included photography into his collages, along with cut-outs from books and magazine clippings. Considered today as an essential part of his oeuvre, a large selection of these early works or objects was recently acquired by the J. Paul Getty Museum and the Los Angeles Country Museum (LACMA).

A new exhibition, Robert Mapplethorpe: Objects, at Galerie Thaddaeus Ropac, Le Marais brings together a selection of these rare and unique works – photographic montages, collages and three-dimensional assemblages – produced by the artist from late 1960s onwards. On view for the first time in Paris, the exhibition shows Mapplethorpe’s exploration of sexuality, religion, esoterism and fetishism, revealing an altogether different side of his work and an extremely personal creative approach that he continued to develop all along his career. In terms of style and iconography, these objects are an unexpected mix between Marcel Duchamp’s ready-mades and Salvador Dali’s psychosexual divagations.

Drawn to symbols and geometric motifs, Mapplethorpe’s collages and assemblages are made by recycling, interpreting and even transgressing religious imagery. He also explored darker subjects such as black magic or Tantra Art, and redesigned Tarot cards, replacing the imagery with male and female figures taken from pornographic magazines. These Objects reflect Mapplethorpe’s radical and innovative approach to the idea of what is possible in art.

Amongst the works on display is Jay Kiss (1973) that combines an enlarged Polaroid photograph of Mapplethorpe’s friend Jay Johnson in a red silk scarf, framed within a red-painted wooden structure with the silk scarf pinned around it. Another large triangular sculpture, Untitled (1983), demonstrates the artist’s longstanding fascination with formal perfection and symmetry, largely drawn from the Christian liturgy. “A church has a certain magic and mystery for a child,” Mapplethorpe told Ingrid Sischy. “It still shows in how I arrange things. It’s always little altars. It’s always been this way – whenever I’d put something together I’d notice it was symmetrical.” In another exhibit, Untitled – Madonna Medallion, a rare 1968 collage shows a picture of Virgin Mary that appears to rise from a shell-like shape which may resemble human organs or even an anatomical view of the male genitalia, alongside a felt sticker medallion embossed with the sacred heart.

The exhibition Robert Mapplethorpe: Objects presents a set of rare collages, three-dimensional objects and photographic montages produced by Robert Mapplethorpe from the late 1960s onwards. These rare pieces, on view for the first time in Paris, reveal Mapplethorpe’s interest in subjects of religion, mysticism, esotericism and fetishism. 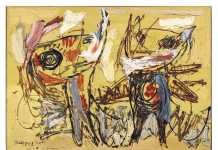